Part of the celebration of the 40th anniversary of the club was a short quiz which was held at the end of a dinner after the AGM at the Cults Hotel. Diners were asked “How many club chairs have there been during the club’s history?” and “who were the first chair and the first female chair of the club?” The answers to these, 18, David Coleman and Vina Kirkpatrick, could have been found on the club website, launched in 2003, for those who have not been walking with the club for 40 years. Members would also have learnt that Kirkpatrick of Banchory was the bus company that the club mainly used in the early days with Paddy, sadly departed, being our most regular bus driver. An important other duty the bus driver carried out then was to put the kettle on for a hot brew at the end of the walk. During those early days Treasurer Bruce Wood introduced the “bus conductors pouch” to collect the bus fares. The pouch is still used today. Later on Gordon‘s Travel supplied the bus, driven by Gordon himself.

Club members have many talents and Dennis Burn recited “the Twa Dogs” and “Tam o’ Shanter” from memory at one of our club Burns Suppers.

A feature of the club is the social May weekend away. The club has stayed at two islands Arran & Skye, twice each, for these occasions. At the Inchnadamph hotel we drank the hotel out of wine on the first night with the owner having to raid supermarkets in Ullapool to supply the rest of the weekend. The most northerly May weekend away venue was at Tongue, from which a party travelled to Cape Wrath.

Anniversary diners could have deduced that the highest hill walked on all of the regular club outings was in fact Ben Macdui but would have to have known that adding Drambuie, ice and a twist of lemon to whisky makes a “rusty nail”, the preferred after walk drink of some of lady members.

The evening ended with cutting and eating an anniversary cake. We like cake! 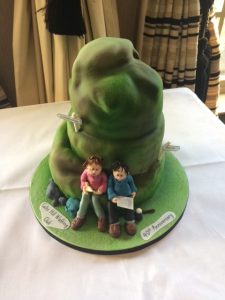